President Erdoğan Will Visit 40 Cities Before the Referendum 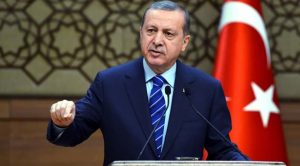 President Erdoğan  will meet citizens in 5 cities in 3 days. Erdoğan’s first stop will be Kahramanmaraş.

Erdoğan will meet with the public in Gaziantep and Adıyaman on Sunday. The president will go visite 40 cities on the referendum campaign. Erdoğan is expected to visit 33 provinces in the coming days, especially in the big cities.

President Erdoğan made a statement during a speech, “We need to solve the interest issue once, I know my loneliness.” Upon this announcement, a signature campaign titled “Not Solo Not Reis” was initiated in Adıyaman and the results of the campaign were delivered to the President by Deputy Chairman of Parliament Ahmet Aydın and Adiyaman Mayor F. Husrev Kutlu. Erdoğan, who thanked him for the invitation, said he would visit Adıyaman as soon as possible.

Erdoğan: We will Bring the Death Penalty After the Referendum

Yoga And Meditation on the Banks of the Munzur River

The U.S. Court of Appeals Once Again Prevented the Government from Blocking WeChat