Turkish President Erdoğan: Women Are Not Equal To Men 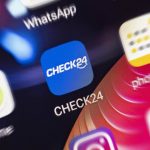